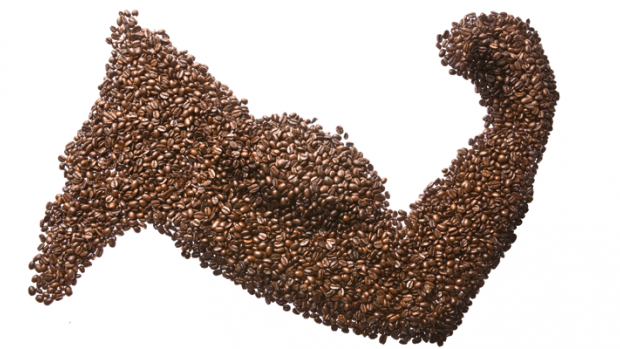 Getting plenty of protein in your diet should always be a priority if you’re eating to build muscle, but new research suggests you should have mustard with your protein-packed steak. A research report published in the FASEB Journal found that homobrassinolide – a type of plant steroid found in mustard – has a stimulatory effect on protein synthesis in muscle cells, which means that eating it can lead to increases in lean body mass, muscle mass and physical performance. Just don’t use this as an excuse to start scoffing hot dogs from the local burger van.

Quick tip Add a dollop of mustard with your sirloin steak for a protein-rich recovery meal after training. Salenium in mustard helps soothe aching muscles after a hard workout.

If you’ve hit a plateau in your muscle-building attempts, try adding a caffeinated drink to your pre-workout routine. While the aerobic performance-boosting benefits of caffeine are well documented, its specific effects on resistance training have been relatively unclear – until now. A new study published in the Journal Of Strength And Conditioning Researchfound that participants who ingested a drink containing 179mg of caffeine one hour before training were able to complete significantly more repetitions to failure than those who ingested a placebo. The study covered a variety of resistance exercises, including the bench press, deadlift and back squat.

Quick tip Make it properly. The average cup of filter coffee contains 140mg of caffeine compared with 100mg in instant coffee and only 75mg in tea.

If you want to build muscle, giving your body everything it needs to recover between sessions is just as important as smashing it in the gym. And few healing foods are as potent as olive oil. The reason? Olive oil contains oleocanthal, which has anti-inflammatory properties that can soothe your aching muscles after a tough workout. A study published in the journalNature found that the oleocanthal in olive oil inhibits the activity of cyclooxygenase (COX) enzymes in the body in a similar fashion to painkillers such as ibuprofen, allowing you to recover faster and hit the weights feeling fresh. Using it to oil yourself up bodybuilder-style: optional.

Quick tip Cook with regular olive oil rather than extra virgin because it has a higher smoke point, which is the temperature it starts to degrade in flavour and nutritional value.

These lesser known members of the mint family have caused quite the stir in the health and fitness world due to their newly discovered nutritional benefits. Made up of 20% pure protein, chia seeds are not only good for muscle repair but they are also thought to aid weight loss. They’re also the richest plant source of omega-3s around, containing a unique type of the nutrient known as steariadonic acid, which gets converted into EPA to guard against inflammation and aid faster muscle recovery.

Quick tip Chia seeds have a fairly strong bitter flavour. Mix them into porridge with honey, or a flavoured protein shake to cover it up, or chuck them into strong savoury dishes such as curries.

One of the most commonly mispronounced words in the culinary world, ‘keen-wah’, also contains the highest amount of protein out of all the grains. Sporting a rich, nutty flavour and a satisfyingly chewy texture it’s a tasty and nutrient packed substitute for rice.
Quick tip Quinoa holds a lot of water so be sure to drain it properly after you’ve cooked it otherwise it might make your entire plate watery. Use a fine mesh strainer to get rid of as much water as you can before serving.

The humble cherry is packed with nutrients that aid exercise. The polyphenols that are found in cherries help to decrease the amount of damage to your cells that occur during intense exercise. Cherries also help to combat post-workout soreness in the muscles, easing inflammation on swollen joints and easing pain.

Quick tip Cherries contain a vast array of B-vitamins, these help convert other nutrients into energy so try to eat them on training days if you can.