“Late night food scoffing could lead to greater risk of heart disease and other illnesses such as diabetes,” reports The Sun. 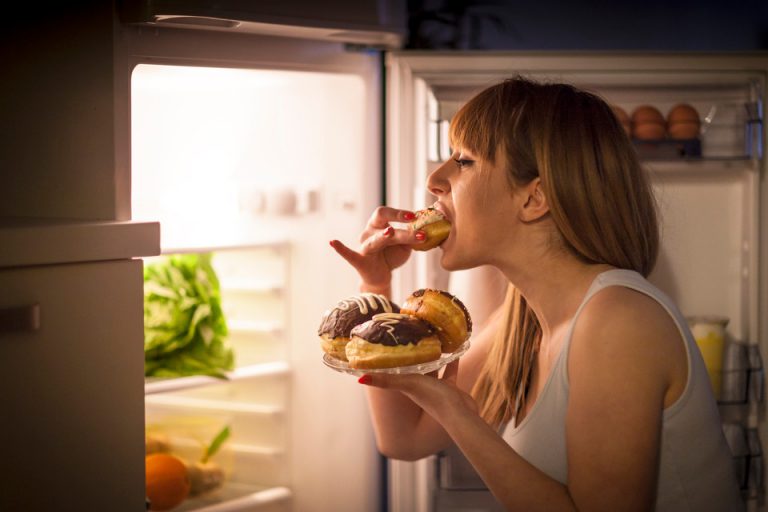 Researchers in Mexico found that rats were less able to clear fats from their bloodstream after being fed at a time when they’d normally be resting.The researchers carried out a series of experiments on the rats. The results suggested a region of the brain that regulates circadian rhythm (the body clock that determines how temperature and hormones change during day and night) was responsible for how rats process fat.

When the animals were fed during their usual rest period, the researchers found fat from food spent longer as triglycerides in the bloodstream.

High levels of triglycerides in the bloodstream have been found to increase the risk of cardiovascular diseases, including heart attacks.

We know that people who work night shifts are at higher risk of heart disease a topic we discussed back in 2014, and that higher levels of triglycerides in the blood may play a part in that.

Although this study is in rats and we cannot be sure the results will apply to people, the findings suggest the body is better at processing fats when it is at its most active.

While there is little you can do about your work patterns if you work at night, you can eat a healthy diet and take exercise to reduce your overall risk of heart disease. And for those who work during the day, the study suggests it may be best to avoid regularly eating a big meal late at night.

The study was done by researchers from the Universidad Nacional Autonóma de Mexico and published in the peer reviewed journal Experimental Physiology.

The Sun and the Mail Online gave reasonable overviews of the study, although it was not clear from their headlines or opening paragraphs that the research was in rats, not humans.

The Mail Online made assertions such as: “Scientists found jet lag, or simply staying up, is also dangerous by leading to midnight suppers,” although these activities were not covered by the study, which only looked at laboratory rats.

This research involved a series of experimental studies using laboratory-bred rats. Animal research is used when the equivalent experiments on humans would be unethical or impossible. Animal studies can tell us useful things about how bodies work, but the results don’t always translate to humans.

Researchers carried out a series of experiments in groups of rats, to see how their bodies responded to fat given at different times of the day, in different ways, and under different conditions:

All the rats were kept in the same types of conditions and allowed to eat the same rat food (although they were deprived of food for a period before some of the tests).

Except for the rats kept in darkness for 36 hours, they were kept with a 12 hour light and 12 hour dark cycle. As rats are nocturnal, their active period is usually during the dark.

The researchers said their results showed that rats’ ability to process triglycerides at different points in their activity cycle seemed to be dependent on the part of their brain that controlled circadian rhythm.

They say that the “daytime results of the rats are thought to be equivalent to night in humans” because rats are nocturnal.

While the occasional bed-time snack, late dinner or bout of jet lag is unlikely to cause lasting damage, this study is more worrying for people who regularly work night shifts. We already know that these people are at higher risk of getting heart disease. This research suggests a reason why this might be the case.

However, there are limitations that mean we can’t put too much weight on the study. Firstly it was carried out in rats. While the results might apply to humans (who are usually daytime animals), we don’t know that for sure.

The study looked only at one type of food – fat. And the rats had it delivered by tube into their stomach or injected directly into the blood. This could have a different effect on triglyceride blood levels than eating other types of non-fatty food in the normal way.

The research might help doctors find new ways to keep night workers healthy. For example, night workers might need to have more regular tests of their cholesterol and triglyceride levels. It might be that eating a healthy, balanced diet, not smoking and getting plenty of exercise is even more important if you work regular night shifts.

There are lots of things that affect a person’s risk of heart disease. Night working may be one of them. But if you can’t change when you work, there are other ways to reduce your risk. Read more about preventing heart disease.