“It’s not what you eat, it’s when you eat that matters: study shows timing your meals right is the key to beating obesity,” the Mail Online reports. 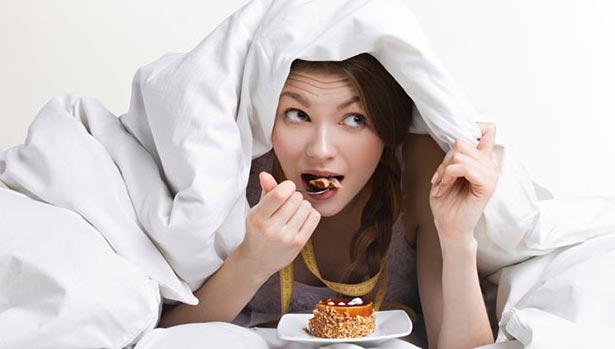 The headline was prompted by a small US study involving 110 university students.Researchers gave them activity monitors to wear, measured their sleep patterns, and observed how much they ate and at what time.

The researchers were particularly interested in what they termed dim-light melatonin onset (DLMO). DLMO is when the body begins to wind down in preparation for sleep and starts producing the sleep hormone melatonin.

For most of us, our DLMO usually begins around 8pm. But the timing can vary if you do shift work.

The researchers found students with a higher body weight tended to eat more of their calories later in the day, closer to their DLMO.

This adds to previous evidence suggesting it’s good to consume more of our calories earlier in the day, when we have more opportunities to be active ahead of us. Eating large, heavy meals late in the evening has also been linked with higher body fat.

But as a single study in a small, specific sample of students, this study provides little evidence that lifestyle and eating habits have a direct effect on body weight.

As advice goes, it may be sensible to consider whether regularly eating a large, heavy meal close to bedtime is the best thing for your health and wellbeing.

Eating earlier in the day may not make you magically thinner, but it may help prevent night-time indigestion.

The study was conducted by researchers at Brigham and Women’s Hospital and Harvard Medical School in the US, and the University of Murcia in Spain.

It was published in the peer-reviewed American Journal of Clinical Nutrition.

No external sources of funding are reported for the study, although the authors declared various conflicts of interest as many of them work, or have worked, for a wide range of commercial interests.

The Mail Online’s coverage was accurate, but may have benefitted from noting the limitations of this small, cross-sectional study.

This cross-sectional study aimed to see whether timing of eating, particularly eating at a later hour in the evening, was related to body clock and the amount of calories consumed.

The human body normally defaults to a 24-hour light-dark, wake-sleep cycle. Put simply, we wake up when it’s light and go to bed when it’s dark.

But with electrical lighting and modern lifestyles, we’re now able to control our own wakefulness, and can stay awake and eat late into the evenings.

Various studies suggest eating at a time naturally reserved for sleeping could have adverse effects on weight and metabolic health.

This study observed the eating and activity patterns and body measurements of some university students across the course of a week.

You can observe links in this type of study, but you can’t prove cause and effect.

What were the basic methods?

The study recruited 110 university students aged 18 to 22. They took part in a 30-day sleep-wake monitoring study, where they were instructed to wear a wrist actigraph monitor at all times.

An actigraph is a device that can provide a reasonably accurate estimate of time spent asleep by measuring physical activity and light exposure.

The students also kept daily sleep and exercise diaries. Sleep timing and duration was assessed from the actigraph monitor and correlated with the diaries.

For 7 consecutive days in the middle of the course, participants were asked to record all the food and drink they consumed.

They did this using a mobile app that allowed them to take photos of all the food they ate and record which meal or snack this was.

They also came in for a single night’s sleep in the study lab, where they had saliva samples taken in dim-light conditions to measure levels of the sleep hormone melatonin.

Release of melatonin marks the start of the biological night, when our body clocks begin to shift into sleep mode.

What were the results?

The study gives a breakdown of the average calories consumed and their timings.

There was no difference between students with higher and lower body fat in the timing of melatonin release.

But researchers noticed that for individuals with higher body fat, the midpoint of all the calories they consumed for the day was later than for leaner people, and 1 hour closer to the onset of melatonin release.

And those with a calorie intake-midpoint later in the day were also more likely to consume a greater number of calories at this time. People eating more calories later in the day also tended to have less sleep.

The researchers said: “These results provide evidence that the consumption of food during the circadian evening and/or night, independent of more traditional risk factors such as amount or content of food intake and activity level, plays an important role in body composition.”

Previous research suggests we may be better off consuming more of our calories earlier on in the day, when we have a full, active day ahead of us to use up the energy.

It’s also been observed that people who consume large calorific meals late in the evening can have a higher body weight.

In a sense, the results of this study seem plausible and don’t really say anything different from what’s already been observed. But as this is a cross-sectional study, it can’t really prove very much.

The study involved a small, select sample of US university students. Their results can’t be applied to everyone, as they have different lifestyles and sociodemographics from the general population.

And a cross-sectional study can only show associations – it can’t prove cause and effect.

The participants’ body weight was assessed at the same time as their food intake and sleep patterns.

Though again it seems plausible, we can’t assume that the students’ lifestyle and eating habits have directly caused their current body weight.

This study will doubtless contribute to the body of evidence around timing of food intake, relationship to the sleep-wake cycle, and body weight. But it provides little proof as a single piece of evidence.

The best way to achieve and maintain a healthy weight is to eat a balanced diet high in fruit and vegetables and low in saturated fat and sugars, and to get regular exercise.

Read more advice on how to eat a healthy, balanced diet.

Can a daily cup of tea help prevent glaucoma?
Scroll to top